Whilst we all hear and contribute to the ongoing discussions and debates, sharing passionate words with those on both sides of the 2014 Independence and the fault lines created by the 2016 EU Referendum 2016 result and the fast emerging implications of some kind of departure from the European Union, quietly and methodically, the case for recognition of Scotland’s independence slowly matures.  Successful independence supporting marches held in Glasgow and Dumfries in May and June of 2018 mark the start of a Scottish Summer of popular affirmation that the time is fast approaching when it will most definitely be the time to ask the people of Scotland, for only the second time in 300+ years if they wish to exert their right of self-determination.

Once upon a time the arguments for Scottish independence were shrouded by the shrill noise from opponents claiming that demands for self-determination were simply hollow voices of flag-waving, blood and soil, ethnic nationalists, variously accused of being “vile separatists”, “xenophobic” and of naively disregarding the economic realities caused by generational dependency on our bigger “more successful” partner.  During the 2014 campaign these accusations found their peak in the now infamous “Project Fear” where a rational debate about the strengths and weaknesses of the prospects for a newly restored sovereign Scotland was reduced to media soundbites intended to scare voters away from anything other than the status quo.  The UK Government and its print and broadcast media allies broke all the agreed purdah rules, enshrined in the Edinburgh Agreement, to introduce the now discredited “Vow” a week before the vote being effectively an offer of a third choice that was not on the agreed binary referendum ballot paper.

If breaching purdah rules wasn’t enough, the post-referendum national debate under the auspices of the Smith Commission in a “smoke-filled room”, saw those present thrash out an agreement where the three Unionist parties combined to re-interpret, and, some would say, to water down, the implicit offers within “the Vow” into the resulting report which itself, in turn, was the catalyst, if not ultimately the blueprint for a new Scotland Bill which has to-date singularly failed to achieve its primary objective of silencing demand for further constitutional discussion.

The May 2015 General Election result saw the Scottish National Party surge to dominance returning 56 of the available 59 Scottish Westminster seats following the howling errors made by the UK Government and the other Unionist parties post-2014.  This strategic and tactical mismanagement has given a boost to the growing calls for a revisit of the independence question posed 3 years ago.  These demands are being amplified by the “Leave” result of the 2016 EU Referendum and the subsequent posturing that has replaced the policy vacuum that has existed since David Cameron’s resignation on the 24th June 2016.  An electoral map reset in the 2017 UK General Election still saw Scotland return a substantial majority of independence supporting SNP MPs despite all attempts to position this as a massive electoral defeat for those seeking change.  I am still able to remember when such a result would have been considered by Margaret Thatcher’s Prime Minister to be the trigger for the negotiation of independence by Scotland’s democratically elected representatives.

Against this tumultuous backdrop, Scotland finds itself once again considering the choices as to how to organise itself to be the kind of country its people want to live in.

For me, at this delicate time, the debate needs to be re-framed to introduce much needed clarity. The perspectives on all sides need to be refreshed to rinse off the polarising effects of the debate leading up to and since 2014.

Scotland is universally recognised as a country, a nation, in its own fully fledged, stand-alone right.  From the United Nations itself, the Treaty and Acts of Union of 1706 and 1707 respectively and the modern world’s ultimate arbiter, Wikipedia, Scotland is, inalienably, held to be an independent country.  However, and here’s the rub, since 1707, well before any modern universal democratic principles were employed to make decisions within these islands, Scotland’s then governing elite decided to pool sovereignty for trade and economic benefit with their southern neighbour, England, creating what has evolved into a single, recognised sovereign state the United Kingdom of Great Britain and Northern Ireland.  These arrangements must be seen as transient, temporary and to only remain in place whilst they are beneficial severally to each component nation.  In 2014 Scotland democratically determined to continue these arrangements following a 2 year referendum campaign pending promised changes made with little planning, or consideration having only been considered and announced one week prior to the vote.  Hardly a compelling result where confusion has reigned as to the precise intent of the Vow and how the No vote can possibly be interpreted as anything other than the decision to leave things as they are.  The Vow and its support from UK Government figures, both present and past, meant it is impossible to be sure what people were actually voting on and for as they wielded their pencils on the 18th September 2014.  Similar claims of ballot-confusion are also levelled at the EU membership referendum of 2016 the mandate from which is still hotly disupted, some 2 years on.

In all future constitutional debates and referendums it is important that Scotland’s sovereignty is recognised to be inviolably held by its people.  Currently it is merely held to be on loan to the United Kingdom Parliament whilst it so suits the Scottish people for this to remain the case.  The framing of future debate should at all times recognise the right of Scots to determine their own constitutional future regardless of the will of the majority of the representatives of and future constituted UK Parliament.

Scotland is currently a member of multiple Unions including, but not limited to, the United Kingdom, the European Union and the United Nations.  The United Kingdom is now a Union under review.  Scotland, as an independent nation, has the right, at any time, to determine if her needs are best served by continued membership of any of these Unions.

Despite the referendum result in 2014 where staying within the UK was the preferred option given the last minute, purdah-breaching, Vow intervention, Scotland’s preferred position within the European Union has been given notice.  The UK-wide referendum result saw 52% vote for leaving the European Union whilst 62% of Scots voted to remain a member.  Despite this overwhelming mandate for Scotland to remain in the EU, the implications of continued pooling of sovereignty have seen the express wishes of the Scottish electorate be subsumed, mathmatically, by the sheer multitude of the 85% of UK-wide voters who represent England.  Thus Scotland gets whatever England votes for. Period!

In some circumstances, arguably, this may not be a bad result when England votes the same way that Scotland does.  In these circumstances Scotland gets what England votes for, and if they’re the same thing all is well.  When the views and votes are diametrically opposed then the situation is far from clear.

Consider these electoral imbalances against the backdrop of recognition of Scotland as a separate legal and cultural entity, currently pooling sovereignty within the context of the UK.  How long can the Union survive this imbalance of representation?  How long can a UK Government continue the pretence of democratic representation when a Scotland Bill becomes a Scotland Act without a single amendment made by a Scottish representative being accepted by an English majority governing executive?  How long will the majority of pro-independence Scottish MPs at Westminster play this game of constitutional charades without meaningful protest?

Many have called for the Westminster SNP MPs to mark their displeasure at these arrangements by withdrawing from the House of Commons and re-convening as a Scottish Conference.  Such a body could commence with parallel activities undertaking to shine a uniquely Scottish light on matters placed before the UK Parliament.

The Conference could ask themselves what does Scotland want to do on this matter and provide a published account of how the representatives of the nation of Scotland would voice their will whilst comparing and contrasting this with the will of the English majority who will always overrule any Scottish dissenting view given the arithmetical superiority.

Accordingly, it is for Scots in a future referendum on the question of independence to answer, by acknowledging the current state of independence ,where sovereignty alone has been pooled, do they wish that situation to continue.  The dissolution of the Treaty and Act of Union will send a stronger message to the world than one which pleads for a return of identity.  Leaving a Union, as the rUK has already determined to do, is hailed by many as a stronger statement of independence than a timid, conditional statement re-asserting, as it would, Scotland’s proud identity as a stand-alone nation today, in all but sovereignty.

Should Scotland remain a member of the Union with England (and Wales and Northern Ireland)?

This question would have the same legal outcome as the 2014 referendum.  To truly allow Scots to speak for Scotland and to represent its collective wish in the world, Scotland must now leave this imbalanced relationship with its southern neighbour.  Asserting the sovereignty of the people over the Union Parliament’s dominance takes place most beautifully during a referendum.  Between 7am and 10pm power truly rests in the hands of the people.  Queen Elizabeth II recognises this with regards to Scotland as the case of Fife Council in 1974 underscores.  So for sovereign Scots to regain sovereign control of their own affairs and to renegotiate an essential trading relationship to then build on trade, commerce and shared values with England as an equal partner will be to truly assert that Scotland has been truly independent all along and just didn’t get round to realising it.  Until now.

Fifty-something (!) husband, dad, son, brother, uncle etc. An ex-pat Scot I now live in North East Hampshire and work in the business software industry. My 3 children are growing up and starting to move away so getting a little more time to pursue a wide range of interests to keep physically fit and also maintain the creative muscle. 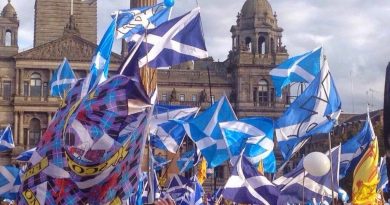 Leave a light on for Scotland 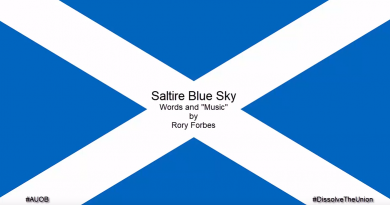 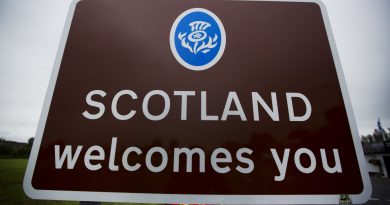